I’m holding out on saying where I got these from until I figure out if it it is okay to post them. But enjoy 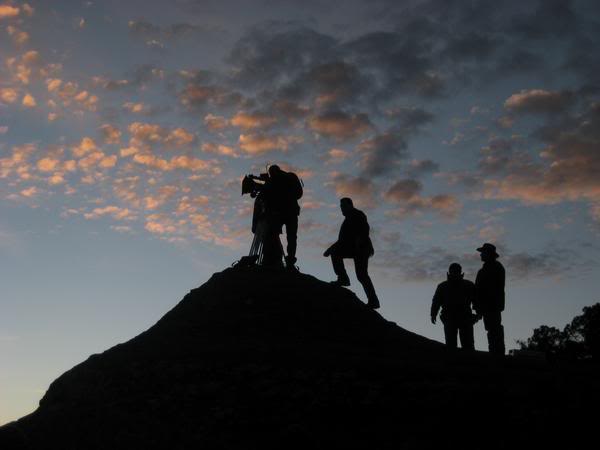 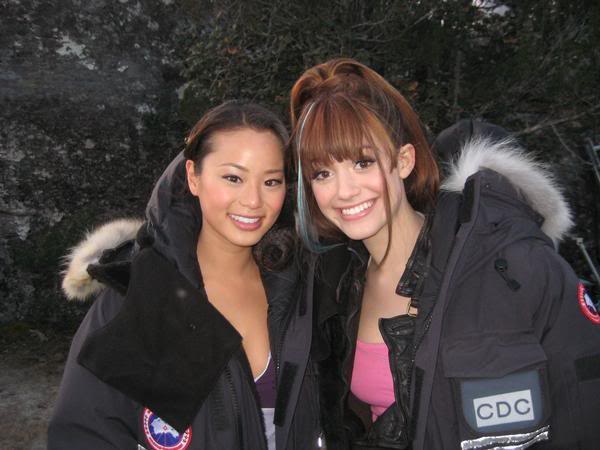 Grant Says:
April 18th, 2008 at 3:15 pm
look at the bottom picture. theres a dude with either a seriously popped collar, or it’s piccolo in his armor

AlexM Says:
April 18th, 2008 at 3:17 pm
I like that blue streak. But I thought her whole hair would be blue the color of the streak looks like it could have been pulled off as a real hair color. Her hair is so cute either way!!

Chatwin looks so tired. But that must be a good sign! 😀

Jaime and Emmy look so cute in that pic, it looks like only one streak in blue though, I thought it would be multiple streaks, maybe its just the angle.

lol that COULD be Piccolo or maybe even be one of his minions, cuz he looks fat 😆

… Or, it could be a guy in a puffy coat? The camera’s pointing away from them so he could just be crew. I really like that picture. Quite artistic. :3

And I’m loving what I can see of Emmy’s leather jacket. Though that could be her own. Either way 😀 … anyone else think Emmy looks a wee bit like Kari from Mythbusters or is that just me being weird?
… Yeah most likely me…

and yeah, she does kinda look a bit like kari

peanuts Says:
April 18th, 2008 at 5:24 pm
lol Chatwin looks scary. But Jamie and Emmy look cute. I wish they would have made Emmy wear more blue streaks but I’m glad they atleast included the blue. 😀 (loving the Goku smilies btw!)

Anonymous Says:
April 18th, 2008 at 5:29 pm
Gosh, am I the only one who actually thinks Goku and Chatwin looks sort of alike?

Lady Vi Says:
April 18th, 2008 at 5:53 pm
There are some similarities, he is total eye candy though so even if the movie does end up sucking I’ll at least get a good show 😆

lol I’m Chatwin will do great, have you seen hi in The Invisible?

But the more I look at Chatwin, the freakier his eyes look, couldnt he do a better pose for the camera XD
Oh well, he’s still hot lol
And Jamie and Emmy look really cool, oh and Im totally loving Bulma’s hair.

www.myspace.com/coreywilson10 Says:
April 18th, 2008 at 6:04 pm
Yippy we got pics!! Thanks JP
Wow!! They do look alike. I think Justin looks exactly like Goku. Justin looks funny in that picture 😀 lol. He’s defiantly Goku alright…. Hey why does Chi chi look so serious? Why so serious???? She looks like she’s telling Chatwin don’t you embarrass me. Chatwin is F*ckin cool 😀 ….

THE VIDEO THAT EVERY DRAGON BALL FAN SHOULD SEE 休憩 v3